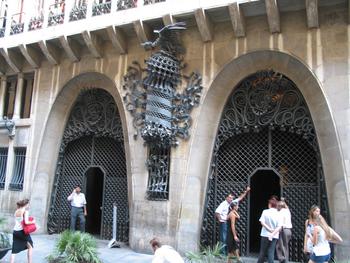 After seven long years of restoration, the Güell Palace re-opens its completely renovated doors keeping its original essence,  and can be visited from Tuesday to Sunday from 10am to 8pm with admission only 10 euros. Antoni Gaudí built the Güell Palace as a request from Eusebi Güell who wanted a new home in Barcelona and had an amazing admiration for Gaudí. The architectural wonder is located on the street of Nou de la Rambla, 3-5, in the Raval district – easily accessible from any Ramblas apartment in Barcelona. In fact, this palace is the only building that Gaudí ended completely himself and subsequently there have not been any substantial changes on renovation. It is therefore one of the most expressive (architecturally talking) of Gaudi work: a building with a complex architecture eloquence, declared a World Heritage by UNESCO for its contribution and influence on the techniques and architectural forms shown in the modern construction of the twentieth century.

Because of the narrowed street where the building is located, it is difficult to observe the whole facade; however, Gaudí designed a monumental entrance with magnificent wrought iron gates, decorated with the shield of Catalonia, a medieval knight and a dragon, work of Joan Oñós.

The entrance size is so impressive because it was designed, so visitors could access on horses or in carriages, where they will go directly to the basement, accessible through an ingenious helical ramp where a stable for horses was built. A very innovative idea for that time, created by Gaudí, everything inside the palace is designed with a richly decorated Moorish style, which highlights the coffered ceiling with wood and iron.

There is a three storey high receiver which is the main focus of the building, surrounded by the main rooms of the palace, from where you can access the noble staircase, having access to other rooms. On the main floor there was a series of rooms where guests were welcomed and entertained, and the main office of Count Güell. As well as other areas decorated with paintings of the “Twelve Apostles” by Aleix Clapp, and an organ next to the chapel, work of Aquilino Amezcua. On the second floor are the bedrooms, decorated in homage of Güell’s wife, Isabel López Bru, daughter of the Marquis de Comillas created by Alexandre de Riquer, and on the third floor were the rooms for the service. On the platform of the facade, Gaudí used an original system of arches and columns with pilasters in hyperboloid a style never employed by Gaudí. 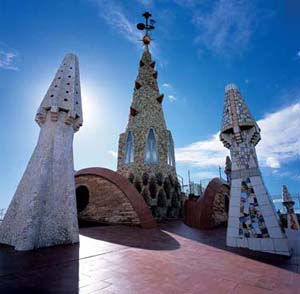 On the roof there are several fireplaces, which far from treating them as useless objects, Gaudí gave them protagonism and became amazing decorative objects essential for the space that only Gaudí will visualize. This way of designing fireplaces would develop on his next work, to reach spectacular master pieces as the Casa Milá or as they call it “La Pedrera”. In total there are 20 fireplaces in geometric shapes, covered with colorful and lively ceramic in mosaic style. It also highlights the high needle-shaped lantern that is the exterior shot of the dome of the central hall, also made of ceramic and topped with an iron weather-vane of which contains the wind rose, a bat and a Greek cross. During the Spanish Civil War, the palace served as a police station, and in 1944 an American millionaire tried to buy it and move it to his country stone by stone but fortunately it became property of the government of Barcelona. In 1996, the building was opened to the public and for many years has attracted the curiosity of visitors from around the world, admiring as usual the work of of the pride of Barcelona, Antoni Gaudí and is definitely one of the architectural jewels of Catalonian modernism. 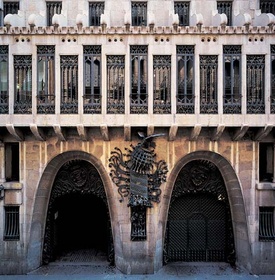 If you are looking for accommodation a little further away from the bustling Las Ramblas, but still with easy access to some of Gaudí´s most famous works, renting a beach apartment in Barcelona or a Sagrada Familia apartment in Barcelona is a good option.
To find city insights and plan your trip, you can find information on Apartment Barcelona´s Facebook page.

Marina is a writer from Barcelona and is passionate about travel and technology. "Whenever I have the time, you'll find me with a backpack discovering the world. And when don't, I write about my wonderful city to help visitors to enjoy it to the fullest."
View all posts by Marina - Marketing Team →
This entry was posted in Places and tagged barcelona, gaudi buildings, guell palace barcelona, nou de la rambla, palau guell, rambla, re-opening, unesco. Bookmark the permalink.