The best festivals in Spain outside of Barcelona

Posted on August 31, 2015 by Apartment Barcelona 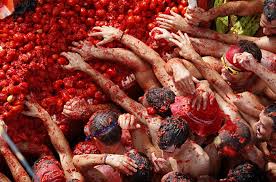 Barcelona is renowned for having some of the best festivals in Spain, such as the massive week of fire-runs and human towers at La Mercè Festival in September. But if you want to delve into more the Spanish traditions across the country, our list of top fiestas outside Barcelona will give you a hand!

When: Mid-February
Where: Sitges, Barcelona 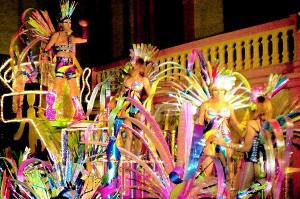 In the week leading up to lent, the Sitges Carnival is well known for its colourful parades. Likened to the Carnival held in Rio de Janeiro, this is one of the best ‘Carnaval’ events held across Spain. King Carnestoltes (the carnival king) arrives in style with a flourish of colour and activity to kick off the festival. Located just 30 minutes outside of Barcelona, this festival is the perfect day trip from the city.

When: April
Where: Sevilla

This popular spring fair takes place two weeks after the Semana Santa Easter celebrations in Spain. It represents the very best of Andalusian culture with tents aligning the riverbank where you can experience food, drink, music and dancing. Catch the fair from midnight on Monday all the way up to Sunday evening when it ends with a bang with an amazing fireworks show along the river. Make sure you try some of the great tapas on offer.

When: Last Wednesday of August
Where: Buñol, Valencia

One of the most well-known Spanish 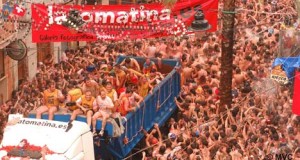 festivals is La Tomatina, aka the tomato throwing festival. This wacky event is held in the small town of Buñol near Valencia, just a few hours from Barcelona by train. The festival first came about in 1945 when a furious crowd started to throw tomatoes after a boy fell from a float at a giant figure parade. In the following years, people started to bring their own tomatoes to make it a tradition which is still going strong today. Although, the festival was banned a few times before it came an official event in 1975.

When: Mid-March
Where: Valencia 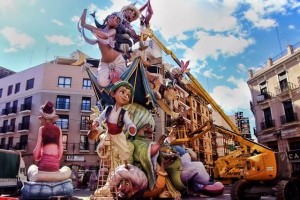 Also taking place in Valencia, Las Fallas is a collection of giant puppets created by each neighbourhood in the city. The puppets are later set on fire at a bonfire to celebrate Saint Joseph. Fundraising for this festival takes place the whole year round but proves to be worth it on the day when the bonfires, music, fireworks and street celebrations take over the city.

San Fermín – Running of the Bulls

When: July 6-14
Where: Pamplona, Navarra

Situated in the city of Pamplona, near Bilbao, The San Fermin festival is a deeply rooted celebration. The leading event held at the festival is the running of the bulls (encierro in Spanish) this involves people running in front of a small group of cattle throughout the streets of Pamplona. Although bull running is held in other cities, the San Fermin festival is the most internationally acclaimed with over 1,000,000 attendees at the event. This festival can be dangerous so make sure to be careful if you decide to try your luck!

When: Mid-August
Where. Bilbao 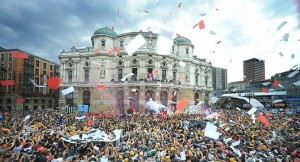 Aste Nagusia, also known as the Great Week of Bilbao, begins on the first Sunday after August 15th. It is the biggest festival in northern Spain, lasting for 9 days. It celebrates the very best of Basque culture, featuring stone carrying, wood chopping, parades and, of course, great food and drinks! You can also see a txupinazo (rocket) shot into the sky and the festival’s mascot (Marijaia) making an appearance on the balcony of the Arriaga Theatre. One of the highlights of this festival is the firework shows taking place every night from 10:30pm.