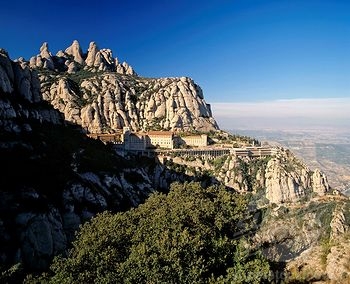 The cultural hub that is Barcelona may be laced with a vast amount of historical sites, fascinating architecture by Gaudí, and much more, but just outside the city lies another wonder: Montserrat. High on top of this beautiful serrated mountain, you will find a picturesque town, complete with one of Europe’s most famous monasteries, which all together will leave you breathless at the awe-inspiring beauty of nature. A day trip to Montserrat not only offers a memorable religious experience, but also the perfect escape from the hustle and bustle of the Catalan capital.

Something for Everyone at Montserrat 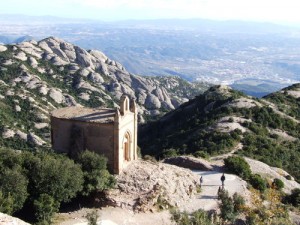 Located about an hour north of Barcelona, an outing to the quaint and peaceful town of Montserrat gives you the perfect setting from which to marvel at the sheer magnificence of the mountain range it is named after. At an astounding 1236 meters above the valley floor, the panoramic view from atop Montserrat Mountain is truly amazing.  It is even said that the island of Mallorca is visible from Montserrat on a clear day.

With a span of 10km and breadth of 5km, the mountain is a hiker’s paradise, offering numerous trails of different lengths and levels of difficulty. More intriguing may be the many fascinating tales of how this natural wonder came to be. One myth states that it was ‘carved by little angels bearing golden saws’, while the more logical geographical notions blame 10 million years of nature at work. With theories ranging from those that believe the mountain was once submerged under water, to those that claim the active volcano, Soufriere Hills, helped shape this geographical wonder, Montserrat offers visitors an interesting insight into the mysteries of the Earth.

A trip to Monsterrat is also ideal for those actively interested in religion, as it is home to one of the most important monasteries in Europe: the Benedict Abbey of Santa Maria de Montserrat. Pilgrims flock to this religious sanctuary from all over the world, as it is considered to be one of the most important religious retreats in Catalonia. The abbey also holds significant value for the Catalan people, as it was once a place of refuge for scholars and politicians during the Franco’s regime. 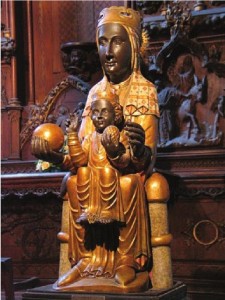 A visit to Montserrat would not be complete without a tour through the abbey. Millions of tourists flock to this religious landmark to see “La Moreneta”, also known as the black virgin. The statue, which has been protected by monks since the early 12th century, attracts pilgrims from far and wide, who make the journey to touch the virgin’s golden orb with their left hand, while simultaneously raising their right hand, showing their respect to Jesus.

La Moreneta was originally located in the Santa Cova (sacred cave), which is a 40-minute hike down through the mountains. The original figure has been moved to the monastery, but a replica sits in her place inside the gorgeous grotto.

Besides the tour, The Escolania, the Montserrat Boys’ Choir, performs daily at1:00pm. Established as one of the oldest choirs in Europe, the group consists of 30 boys (altos and sopranos) who live, study and sing within the abbey, a true devotion to musical prayer. Occasionally, they are joined by the Montserrat Chapel Choir, and their performances now branch out to other parts of Catalonia.

After a tour around the monast 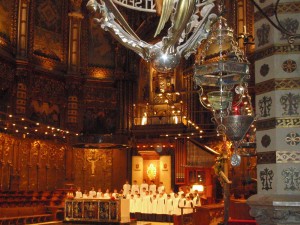 ery, taking in the incredible views of Catalonia from the mountain top or strolling through the town of Montserrat will complete your experience perfectly. The main street of the settlement is lined with local food vendors selling home-made treats ranging from honey, milk and cheese to candles and souvenirs, while different vantage points on the mountain can be reached by walking or hiking, allowing you to get a good look at the city of Barcelona below.

A Simple Trip: Getting There 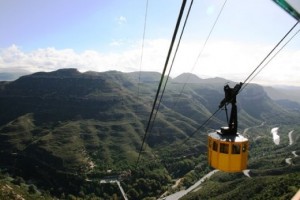 A visit to Barcelona would not be complete without a day trip to Montserrat. Choose to stay in one of the many Barcelona apartments in the city center, and travel to and from the mountain in the same day.

To take the cable car: Get off the train at the Montserrat-Aeri stop, where you can meet the cable car. On the way back down, the cable car leaves from the monastery around at 40 minutes past the hour.

To take the rack-railway: Get off the train at the Monistrol de Montserrat stop (one stop after Montserrat-Aeri) and hop on the mountain train. To get back down, this train departs from the monastery at around quarter past the hour. (Be sure to check the schedule for time changes!)

Marina is a writer from Barcelona and is passionate about travel and technology. "Whenever I have the time, you'll find me with a backpack discovering the world. And when don't, I write about my wonderful city to help visitors to enjoy it to the fullest."
View all posts by Marina - Marketing Team →
This entry was posted in Activities, Places and tagged barcelona activities, barcelona day trips, barcelona family activities, barcelona tourist guide, Monserrat Mountain, montserrat monastery, outside barcelona. Bookmark the permalink.