The chances are you’ve heard of the architect mastermind Antoni Gaudí. If you’re coming to Barcelona, undoubtedly the famous Sagrada Familia is on your list of ‘must see’s’ during your stay. However, many visitors don’t manage to experience some of his other fantastic pieces, such as La Pedrera and Casa Batlló. Don’t be one of those visitors! Here, out Barcelona Tourist Guide will explain just a few of the reasons why Casa Batlló should be near the top of your sightseeing checklist.

The Start of Something Beautiful 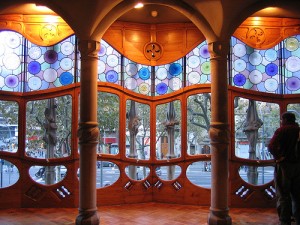 Casa Batlló was built between 1904 and 1906 by Antoni Gaudí, and was commissioned by textile industrialist, Josep Batlló. The original structure of the building, located on the bustling street of Passeig de Gràcia, was completed in 1877 by Emilio Sala Cortés. When Gaudí was first commissioned to work on the house, he was to knock down the existing structure and rebuild it from the ground up. However, it was later decided that renovations to the building would be much more practical.

Josep Batlló was a distinguished man in Barcelona, owning and operating many textile factories in the city. When he and his wife moved into the house, they knew they wanted theirs home to be different than those of others within the Batlló clan. Therefore, they hired Gaudí to come up with an innovative and creative plan, to which they did not limit in any way.

The family lived on the noble floor of Casa Batlló until the middle of the 1950s after their deaths. This noble floor is the first floor on the building that houses the gallery, which overlooks all of Passeig de Gràcia, the dining room, bathrooms, and many other spacious areas of the living quarters. 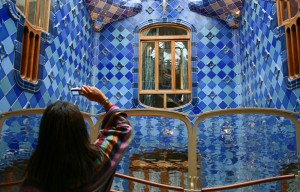 Antoni Gaudí was known for his symbolism and creative representation of daily images within his works. Casa Batlló was absolutely no different. They basis of the house was an ‘animal come to life’, evoking nature with organic structures and suggestive fantasy. The façade, for starters, has columns representing bones and a wavy shape surrounds the entire face of the building, suggesting movement. The building is composed of mosaic tiles, creating a beautiful color and image, as well as representing fish scales and aquatic life. The roof of the façade bodes giant towers, recalling an animal’s spine, doused with more mosaic tiles. The inside of the house was also completely influenced by mythical creatures, fantasy, and animal life. However, many of the functions of the house are also built due to practicality, making the house a “smart house,” of sorts, for its generation. The handles on the stairwell, for instance, are figurative of reptile spines, while also being shaped to fit the form of a human hand as one descends the brilliant staircase.

Our house, in the middle of our street

Today, the house has been turned into a cultural museum for the public and tourists to gaze at, learning to comprehend the ‘ins and outs’ of Gaudí’s modernist mind. The house is open with a complete audio-guided tour for a general fee of around 18€. Don’t forget to make your way up to the roof after the audio tour ends, for a spectacular view of Barcelona where you can also discover even more of Gaudí’s masterpieces. Tickets can be bought directly at the ticket office, located outside the front entrance of the building, or by visiting the 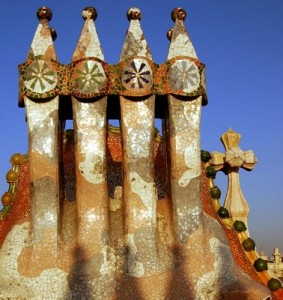 Casa Batlló website. The building is open 365 days a year from 9am to 9pm. Located in the center of the city, on Passeig de Gràcia, Casa Batlló is very easy to find, and hard to miss due to its exquisite colors that sparkle in the Barcelona sun.

Whether you are coming to Barcelona for two days or two weeks, touring the interior of Casa Batlló is a must. You could even choose to stay in one of many Barcelona Apartments near the grand Passeig de Gràcia and look out onto, or walk by, Casa Batlló everyday. A home like no other, Casa Batlló gives you an insight to what it must have been like to live inside the makings of an artist.

Marina is a writer from Barcelona and is passionate about travel and technology. "Whenever I have the time, you'll find me with a backpack discovering the world. And when don't, I write about my wonderful city to help visitors to enjoy it to the fullest."
View all posts by Marina - Marketing Team →
This entry was posted in Places, Travel & Vacations and tagged Barcelona accommodation, barcelona apartments, barcelona architecture, barcelona art, Barcelona culture, barcelona tourist guide, Gaudi, gaudi architecture, museums in Barcelona, sagrada familia. Bookmark the permalink.